When I initially talked to this pet owner, who lives east of Indianapolis, she somehow ‘forgot’ to tell me about the 0’possum who lives in the master bathroom.  As I was taking my first tour of the house and meeting Levi, the 165# Mastiff with a head as big as a watermelon and Betty, the 16-year-old deaf black Lab, the homeowner and I were in the master bedroom where the dog beds are.   ‘Samantha’ casually asked if our mutual friend and the source of this gig’s referral, had mentioned anything about a possum.  “No, why?”  “Well, because I have one who lives in this bathroom.”

We went in, me behind Samantha, and opened the lid to a box where I see the head (kinda cute, actually) of a possum nestled in a nest of towels.  She tells me that Ms. Possum comes out once a day to eat (people food), drink, poop and pee…and then goes back in to nest.  Ms. P was a rescue possum who has a bum leg and can’t walk well.  I bravely said that I had no issues with pet-sitting a possum.

I arrived Wednesday afternoon of this week to start this gig.  Levi the Mastiff is massive and a weenie at the same time.  He wouldn’t come near me when I first visited.  On Wednesday—my first day here—he ran from me and wouldn’t eat any food.  When I opened the master bedroom door that goes to the deck to let both dogs out before the onset of the huge brewing storm coming in from the west, I wanted them to do their business before the storm. 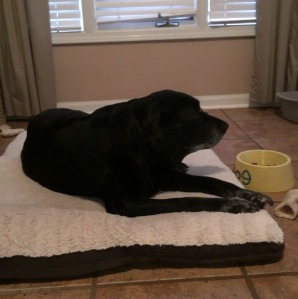 Betty, the sweetie, hasn’t left the bedroom one time except to be coaxed outside to pee/poop.  She misses her Mom.

Well, Betty the deaf Lab wouldn’t budge and showed no interest in going outside to pee.  I went back to the written instructions that I took on my initial visit and saw that there were leashes in the garage.  I cautiously put a leash on her and coaxed her to go outside, down the steps where she pooped and peed right at the bottom of the steps and came immediately back in.  She showed no interest in eating any dinner from her bowl. 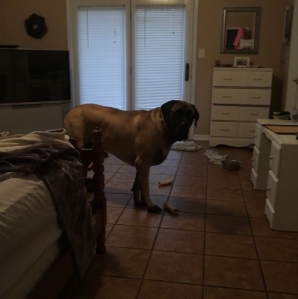 Once Levi got outside, he WOULD NOT COME BACK IN!!  He also barked at me with his deep scary voice (which belied the softie that he really is) and let me know that he would be in charge of this new relationship of ours.  The rain clouds got closer and then started dumping their torrents.  Still Levi remained determined that he wouldn’t come in because that’s what I wanted him to do.

There is Door A in the master bedroom.  I rediscovered Door B coming from the family room.  Both open to the back deck.  I came up with a plan.  [Rain, lightening, thunder!]  I decided to lure him in by laying treats in a path coming into the open-doored bedroom—Door A—and then when I saw that he was in the bedroom (by peering sneakily from Door B) I ran through the rain to Door A and close Levi in from the outside and then run back to Door B and close us all in.   He sensed a trick and as soon as he knew that I was running through the rain to close Door A, he ran quickly back out into the storm.  We did this dance a bunch of times.  Of course, we were both soaked [Rain, lightening, thunder, storm warnings on TV!]

Yummy dinner.  You cook almost as well as my Mom!

I took a break from this extremely fun game to feed Ms. P.  I warmed up the zucchini, summer squash and chicken that her Mom left for Dinner #1, sprinkled the requisite cheese on top, added a dollop of yogurt and put it on the bathroom floor in front of the box.  I closed the door fully intending to not watch.  But then I realized that I of course WANTED to see her eating, so I cracked the door and there she was in all her glory, eating her nutritious dinner.  She was about three times bigger than I had imagined from just seeing her face.  She was really quite cute (and still is).  After she finished her meal, she went back into the cave.  Easy. 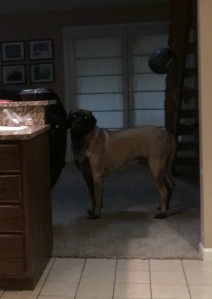 You will not win.  I am smarter than you!

Back to Levi.  I had to come up with Plan B.  I decided to entice him into Door B with a trail of treats and then run from Door A to Door B to close him in. (Mind you, he watched me from the outside through the open door of whichever room I was in.)  Several attempts failed.  He sensed my plan every time and ran back out and ran past me after snarfing up as many treats as he could in the shortest amount of time, acting deathly afraid of me.  I was soaking wet and cold.  I decided that I was tired of being outsmarted by this giant dog.  I had to think even smarter.

I made a longer line of treats and broke them into smaller pieces and made the line go through the family room to the kitchen and into the dining room.  I also turned on the TV to make noise so he couldn’t hear me coming.  This plan worked!!  When I closed Door B behind him, I ran quickly over the deck back to Door A and closed us in!!  I was so proud.  He was mad, but still avoided me at all cost.

Ms. Possum ate with fervor.  Neither Levi nor Betty ate any dinner.  Betty is old, so I put hands-full of the dry food in front of her.  I never saw her eat it, but the little piles kept disappearing.  Since Levi didn’t touch his four cups of food, I decided to put his bowl into the bedroom so he could eat when he got hungry in the night.  Sigh.  What is wrong with me?

I got little sleep that night.  Both dogs were restless and switched dog beds often.  The laminate floor allowed me to hear each dog claw with each step.  At some point in the dark of night, Levi decided he would eat some food.  Oh. My. God.  I can’t even describe the cacophony of sound coming from that direction.  Let’s just say he is not a dainty eater:  It sounded something like rocks being ground up in a metal blender.  When he finished, I tried to go back to sleep—to no avail.  I watched some granddaughter videos on my phone for a while and eventually slept again.

Both dogs were up way before my alarm, just walking around the room.  It was light out, so I opened the door and both dogs went out.  Only Betty came back in of course.  I had to do the treat dance many times again to entice Levi into the house.  Once I corralled him, I was able to go to work.  This has been our pattern each time he is outside.  It is now Friday evening and he is trying really hard to get close to me.  I’m sitting on the deck writing and he walks by me, maybe three feet away.  When he is close I have to hold absolutely still.  If I talk or move, he jumps like he has just been electrically shocked and runs away.  I can tell he is a sweetie.  He wants to love me, but he just can’t trust me.

I am getting ready to pack it up for the night.  He’s been walking in and out, in and out of both doors which I just leave open (fortunately it’s summer and not winter!).  I’m getting ready to leave a long treat trail.  I hope he falls for the treat trick the first time tonight.

I am here until Sunday.  Maybe we’ll be friends by then, maybe we won’t.  Clearly, Ms. Possum and I have no issues, however.  She eats on time, she pees on time and she goes back to bed without any complaints.  She is my favorite!

P.S. Levi and I spent at least 30 minutes going from door to door, me on the inside, he on the outside.  He absolutely knew the plan.  He was determined to not let me win.  Exasperated, I finally closed both doors, leaving him outside to let him think about what he ultimately wanted.  Said the social worker.  HAHA.

Later I opened Door B and sat and watched TV in the family room.  Levi eventually came into the kitchen to inhale all the snacks and I stealthily closed Door B behind him.  Now he is lying on the floor beside me.  He really wants to like me.  But if I move when he approaches, he freaks and runs.  Poor baby.

One thought on “An Elderly Possum, a Deaf Labrador and a Giant Mastiff in One Gig.  Guess Which One is My Favorite!”