Penny thinks that I brought the ghost with me.  Why?  Because her doggie, Rowdy, was not obsessed with the heat vents before I came to stay with her and her husband at the beginning of January.  No one minds, mind you.  The mystery is thrilling…at least to me.  Penny and Norm (fake names, of course) are mildly amused and confused.

Rowdy is a slightly quirky Chihuahua who was thrown over the shelter fence and who retained some physical injuries and some peculiar personality traits.   About a week after I arrived for my month-long stay with my good friends, Rowdy started growling at the living room heat vent.

There is a fabulous table made from an old suitcase in front of the living room vent and Rowdy kept going around the suitcase, side to side, and growling.  I laid on the floor and watched in amazement.  He even sat and looked THROUGH the suitcase and stared in the direction of the vent and shook in seeming fear.  What was going on?!

In the upcoming days Rowdy’s fears extended to the vents in ‘my’ bathroom.  In fact, his fears intensified.  He now was clearly afraid to go near the bathroom vent.  He obsessed over it for hours at a time.  He growled.  He barked.  He kept guard.  He sometimes went to the two vents in my attached bedroom vents as well.

We three adults were left to theorize.  What the hell was going on?

Penny took the vent cover off several times to see if there was actually something there to see or hear or smell.  Nothing. 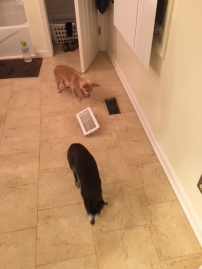 The answer that made the most sense to me was a GHOST in the vent!  Rowdy went to a total of six different vents around the house.  He obsessed on different vents on different days.  Some days the ghost was living elsewhere and Rowdy didn’t pay any attention to any vents in this house.  And then BAM!  OMG!  WHAT’S IN THE VENT!?  Bark, Bark, Bark!

I’m leaving my gracious hosts and pets (Rowdy has an elderly brother) on Tuesday to go to a month-long, dog-sitting gig.   Penny thinks that the ghost will go away because it arrived with me when I arrived.  She has no basis for her theory.  Nor do I have basis for my theory of a ghost at all.  But I ask you, dear reader…do you, by chance, have a better theory?