So far I’m accumulating three categories for these blog confessionals:

I started out with a pretty good record of not leaving stuff at places I’ve stayed, although in the very second house where I dog-sat, I left my phone charger cord and some food in the fridge.  Because the third house I was staying in was in a completely opposite side of town, I had to arrange a rendezvous in a shopping center with a relative of the owner.  I resolved to be more careful, so I did better for a long time.

Recently, however, I’ve lost my mind. 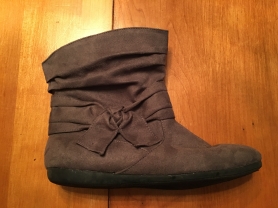 When I left Poppy’s after 6 weeks she texted me and said she knew I’d be back soon, as I had left my COMPUTER!  Then a few days later I got out my gray boots to wear and found only one.  I contacted Poppy who did find the other one under my bed, and I went to pick it up.  Since that time, I can’t find both in my car in any of my tubs. Isn’t my one gray boot cute? Sigh! I hope I still have both of them. Somewhere.

I got a text from my surgery friend where I most recently stayed and she told me that she found my black Skechers under her dining room table. OK. At least she lives fairly close to work when I get back to Indiana. (I’m still at Sister Julie’s in Ohio and headed to my niece’s house in Michigan tomorrow.)

I went to Trader Joe’s and bought stuff for Christmas  at Julie’s who lives in Ohio while I was still in Indy and left it in Poppy’s refrigerator:  Sushi, Fresh Green Bean Almondine, Guacamole. Bummer. I hope they were able to enjoy it.

When I left Brother Tom’s house on a Sunday after spending time with his family’s Christmas celebrations and while on my way to Brother Mike’s farm, I realized I left my only phone charger plugged in in Tom’s kitchen.  For 2 days at Mike’s I made due with only my car charger.

On Tuesday I bought a new charger on my way to Poppy’s house where I stayed over night for one night to see Morgana who was in town from Los Angeles! I left my new charger plugged into the wall when I left her house and had to buy a new one on Wednesday (less than 24 hours after I bought the last one) on the way to Julie’s house. Doofus brain.

Under the random category, I’ve lost two bras somewhere.  I miss the black one.

Also under the same category, I peed behind the Broad Ripple Art Center one evening and I’m pretty sure no one saw me.  Crusty the dog also peed there.  So, what’s the big deal?

2 thoughts on “Confessions of a Nomad: Part 1”